Why to upgrade from Drupal 8 to Drupal 9

As the end of Drupal 7 and 8 is near, we are ready to discuss why to upgrade Drupal 8 to Drupal 9 now more than ever.

Drupal currently has three versions on the market: Drupal 7, 8, and 9. As the end of Drupal 7 and 8 is near, we are about to talk about why to upgrade Drupal 8 to Drupal 9. But before, what is Drupal anyways?

Drupal is a free and open-source web content management framework written in PHP and distributed under the GNU General Public Licences. Most people have never heard about Drupal, which is okay as it tends to be invisible to everyday users. It is fair to say that it provides a back-end framework for at least 13% of the top 10,000 websites, and over a million websites use Drupal worldwide.

Besides its general use, Drupal has the flexibility to offer knowledge management, with eLearning systems, and business applications, with many commerce options. Drupal sites include personal blogs, corporate, political, and government sites.

What is the deal with Drupal 9?

So, what is the deal with Drupal 9? According to Drupalize.Me, not much. Why is that? Because Drupal 9 is not supposed to be a big deal, which stems from a simple reason: the Drupal community has been preparing for this change for a few years already.

Before starting: a side note. Drupal 7 end of life (EOL) was scheduled for November 2021. However, given the impact of COVID-19, the Drupal organization extended this date until November 28, 2022. It’s like we are all making as if 2020 never existed. Am I right?

A long long time ago, in an internet really far away, Drupal 7 reigned for ten long years. (Long years? How can years be long or short? They are always the same! Let it go. Focus.) This period included the constant development of new features and updates for Drupal. However, when migrating to Drupal 8, many developers and site owners had to rebuild their sites completely, which could be considered a lack of agile software development.

Luckily, we don’t have to worry about that anymore. Drupal 9 is the logical next step after Drupal 8.9. Such is the case that many tutorials for version 8 will still be available and apply.

The big deal about Drupal 9 is that it shouldn’t be a big deal.

Even though it is not a big deal, it marks the beginning of a new era—one of the major version updates with an easier-to-adopt innovation. Development has never been easier. Since the most significant object-oriented refactoring happened in Drupal 8, innovations in the content management system have changed.

There are now four major processes for innovation in Drupal:

These four new four processes might already convince you to transition to Drupal 9, but if you still have doubts, let’s see in detail why to upgrade from Drupal 8 to Drupal 9. 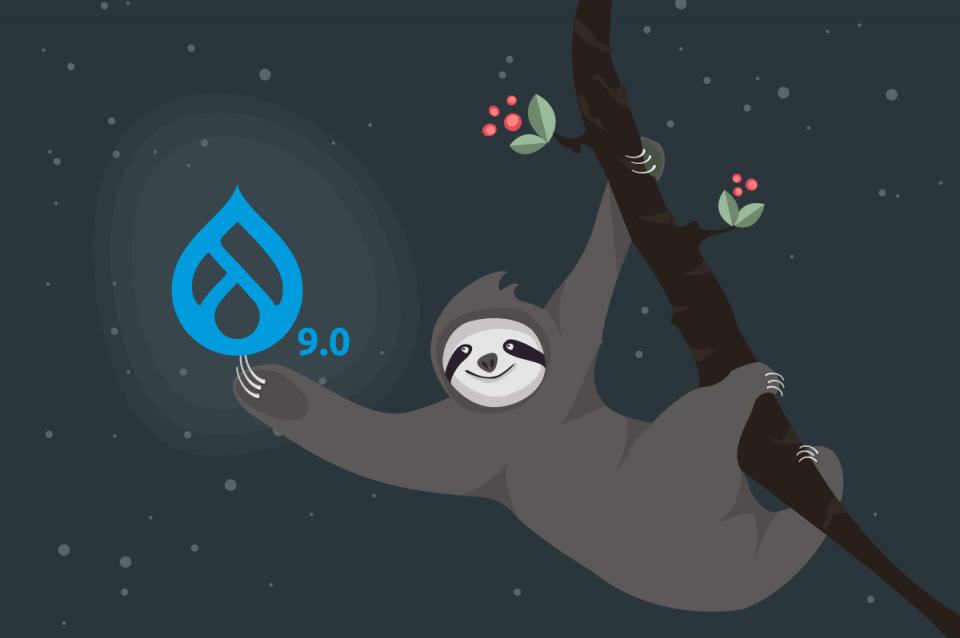 Why to upgrade Drupal 8 to Drupal 9?

Drupal 9 was built inside Drupal 8 and, while there are not many new features in Drupal 9, Drupal 8 is entering the end of life at the end of next year (2022). What does this mean? There will not be support from the Drupal community for Drupal 7 and 8; the only version supported will be Drupal 9.

So the change from Drupal 8 to 9 is not mandatory but recommended. Drupal 9 presents itself not as a new and revolutionary product but more as the logical new step in Drupal development. Among the changes, we find the updates of the Symfony services, new development, and the reduction of deprecated code.

Drupal 9 only presents a new feature: the layout builder. According to our development team, this comes as a great improvement for users of medium technical knowledge. We are talking about people that have installed an OS and that level of tech-savviness. Drupal even created a dedicated user guide for “site builders” (that’s how Drupal calls them).

So why update to Drupal 9 and not stick to 8? Well, the Drupal community considered that there were required updates in dependencies. Drupal, as the majority of open-source projects, relies on other projects for some services and features. These projects have been maintained by other communities, as well. I’m talking about Symfony, jQuery, CKEditor, and Twig. When a new version is released, Drupal must decide whether to catch up or use outdated versions, which is not exactly a choice.

The last reason? Drupal 9 focuses on the removal of deprecated code. It shaves away everything that isn’t necessary or useful in the new version. This rewriting of Drupal 8 code makes the transition easier, as it does not start from scratch. While doing this, Drupal is still open to new solutions while eliminating its deprecated parts. Think of a snake shedding its skin. Does it help?

How to upgrade from Drupal 8 to Drupal 9?

I’ve recovered a talk on how to upgrade from Drupal 8 to 9 by Mahmoud Zayed available on YouTube (you can find the link below). Mahmoud presents seven steps to make your transition from Drupal 8 to 9, a shows that it can be an easy process:

1. Solve all errors and warnings if any

2. Update the project to the latest version of 8.9x

3. Replace deprecated code at the custom modules and themes

4. Update all contributed modules and themes. Ensure they are all compatible with Drupal 9 by using the Upgrade Status Drupal module.

5. If you found a non-compatible contributed module theme you can create and issue and upload a patch or use an existing one.

6. Do a smoke test and make sure you solved all errors and warnings, if any

I know this guide is compact, but I’m also listing a video tutorial below on how to upgrade to Drupal 9 in under 15 minutes. It is pretty simple and clearly explained. If you still feel that you can’t make it on your own, send me a message, I’ll be there for you.

I cannot stress enough the need to check out compatibility issues to avoid suffering those code deprecations. This applies especially to contributed modules and custom modules (focus on these). You don’t want your site to start falling apart over time, as everything is destined to break down to dust and rejoin the universe in the inevitable advance of Entropy…

Back to our subject! Let's do a quick recap before leaving:

At Awkbit, we simply love Drupal. We appreciate that its community is thriving and proposing new features and updates so frequently. For many non-developers and business owners, it is hard to keep up to date with the latest updates while at the same time running a business or keeping the servers up and running. That’s why we are here. Do you need help upgrading from Drupal 8 to 9? Do you want to start a Drupal site from scratch?

Drupal Commerce vs. Magento vs. Shopify

Triple commerce battle: Drupal Commerce vs. Magento vs. Shopify. How should you choose the best for your store?

Drupal vs. WordPress: pros and cons for 2021

Both Drupal and WordPress are free and open-source content management systems. They use PHP, a general-purpose scripting language, and use a similar module/plugin extension structure. Both present templates and a variety of uses. What are their pros and cons?

What does CMS mean, and why use Drupal?

What does CMS mean? Why use Drupal? These questions might be helpful if you are starting your own web project development. Let’s take a look at the invisible software behind numerous websites.

Drupal Commerce vs. Magento vs. Shopify

Triple commerce battle: Drupal Commerce vs. Magento vs. Shopify. How should you choose the best for your store?

Drupal vs. WordPress: pros and cons for 2021

Both Drupal and WordPress are free and open-source content management systems. They use PHP, a general-purpose scripting language, and use a similar module/plugin extension structure. Both present templates and a variety of uses. What are their pros and cons?

What does CMS mean, and why use Drupal?

What does CMS mean? Why use Drupal? These questions might be helpful if you are starting your own web project development. Let’s take a look at the invisible software behind numerous websites.